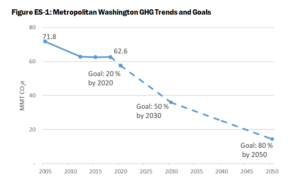 To lessen catastrophic climate change from the burning of fossil fuels, the Metropolitan Washington Council of Governments (MWCOG) has collectively pledged to substantially reduce our region’s emissions of greenhouse gases (GHG) from the level that existed in 2005–by 50% by 2030 and by 80% by 2050. 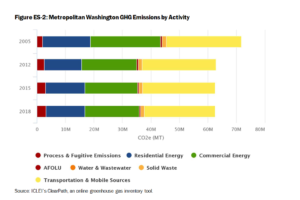 Prince William County and all other localities in the Metropolitan Washington Council of Governments (MWCOG)–and the associated National Capital Region Transportation Planning Board (TPB)–have committed to reduce greenhouse gas emissions to 50% of the 2005 level by 2030.  In the County, the transportation sector–cars and trucks, primarily–is the largest source of greenhouse gas emissions.   By 2030, there will be more electric vehicles (and a somewhat cleaner electric grid), but most vehicles will still be powered by fossil fuels and emit carbon dioxide from tailpipes.

The County’s traditional business-as-usual transportation planning–expanding highways for drive-alone commutes–would sabotage efforts to meet the 2030 target.  In particular, the proposed Route 28 Bypass would not increase local jobs but would increase solo auto commutes and greenhouse gas emissions.  Spending well over $200 million in County tax revenue on the Route 28 Bypass would subsidize housing and jobs in other localities, while sabotaging efforts to meet our region’s 2030 greenhouse gas target to lessen our global climate crisis.

Instead of building the Route 28 Bypass, the eight members on the Board of County Supervisors (BOCS) could plan to meet our region’s 2030 climate target and invest the savings to upgrade local infrastructure to better access local jobs.  What makes the most sense to you?

As members of the Transportation Planning Board (TPB), you have an especially important role in sustainability planning and advancing the Metropolitan Washington 2030 Climate and Energy Action Plan.

Without action by TPB to adopt climate change mitigation goals and strategies, the region will not meet the 2030 and 2050 targets to reduce greenhouse gas emissions.

Technological changes will not be sufficient; we need policy changes that reduce regional VMT and VMT per capita as well.  Fundamentally, the TPB must adopt targets and policies to reduce carbon emissions from the transportation sector.  The impact of new projects in Northern Virginia’s long-range multimodal transportation plan, TransAction, need to be quantified.  Otherwise, how can the 24 jurisdictions in MWCOG meet their 2030 and 2050 targets?

Similarly, each jurisdiction needs to “do the math” regarding planned land use changes.  Transit-Oriented Development can minimize the greenhouse gas emissions that will be increased by population growth.  Those increases must be offset in order to meet the 2030 and 2050 targets, and the impact of changes in land use planning must be quantified. Otherwise, how can the 24 jurisdictions in MWCOG meet their 2030 and 2050 targets?

As noted by the Coalition for Smarter Growth, the 2030 target to reduce greenhouse gas emissions to 50% below 2005 levels is essential for keeping our planet in the safety zone.  We cannot afford to ignore the cumulative impacts of emissions between now and 2030 and focus only on the 2050 target.

Thank you for reaching out to our office.  I have attached the MWCOG plan for achieving GHG reductions.  As you can see on page 11 there will have to be various ways to address this issue and I know both MWCOG and TPB have discussed these at length.  Prince William County is a still growing outer jurisdiction, without Metro, which makes discussion of some of the items you brought up more difficult.  It is my belief that as an outer jurisdiction, with a current heavy reliance on automobiles, we should have a much, much greater focus on electrification of our County-owned fleet as well as encouragement of conversion to EVs through a robust charging infrastructure for our residents.  Even looking at the major activity or transit centers in the west where the housing growth will come from (Broad Run Station, the commuter lot on Route  29 and the commuter lot at Groveton) it will be difficult to get very high density around these three locations for various reasons.   I believe one of the strongest ways to ultimately reduce vehicle miles traveled is to expand our commercial base in Prince William County so people don’t have to commute to their job locations and that is what I am focusing on.  I am sure you will agree that ultimately this is a goal everyone can get behind.

Thank you for you comments as we continue evaluating our land-use and mobility plans to assure our future for the next twenty years.

Thank you for your response to our message regarding the need to reduce greenhouse gas emissions from the transportation sector.  We certainly agree that “one of the strongest ways to ultimately reduce vehicle miles traveled is to expand our commercial base in Prince William County so people don’t have to commute to their job locations.”

That perspective should shape the county’s investments in new transportation infrastructure.  We should prioritize building new capacity that maximizes mobility while minimizing Vehicle Miles Traveled.  The 2040 Comprehensive Plan should focus on creating walkable communities to accommodate the expanding population.  The County priority for new mobility infrastructure should be expansion of local Omniride and shuttle/trolley services, plus bike/pedestrian connections that anticipate increasing use of e-bikes.

To expand our commercial base and increase local jobs, we should stop funding construction of new lane miles designed for Prince William commuters to leave the county–and for auto commuters who live to our west and south to commute through Prince William County–for jobs in other jurisdictions.  In particular, the county’s $200 million subsidy for the Route 28 Bypass is inconsistent with a priority to expand our commercial base in Prince William County so people don’t have to commute to their job locations.

That project, especially when the destruction of houses in an Equity Emphasis Area is viewed through an equity lens, should be cancelled.  The funding earmarked to repay the $200 million in county bonds, should be re-purposed in a joint venture with the school system to fund the Sustainability Action Plan that the Sustainability Commission will complete in the next year.